It’s been a while since the last post. Partly because it feels like there is so much that has happened that it is daunting to write, and partly because, paradoxically, so little progress has been made that it feels embarrassing to say anything.

So the new approach will be to say very little, not to cover everything, but to post more often. It’s going to be a bit like PMQs. i.e. “We have actually put more money into schools…” No further explanation necessary 🙂

Well, in the small news. We have started playing a lot of Words with Friends 2 on our phones. If you ever feel stuck with too much time on your hands just download that app and your life will be busy and fulfilled once again – or maybe for the first time – it’s that good.

Secondly, I was getting the front garden ready for its first ever appointment with a lawnmower, removing stones and whatnot this afternoon and found a couple of old coins, possibly a threepence and a sixpence. But we won’t know for sure  that they aren’t saxon gold pieces until tomorrow when we take them out of the cup of coke that they are soaking in. So, old money in the garden. Talking of which, Lorna and I were having a lovely walk and paddle this morning and watching Alfie (our little Springer-Labrador mashup) who was straining at the lead, staring up at the moor and twitching his nose, dying to get some hectares under his paws and little grouse chicks in his belly, and she asked why the grouse are protected by keepers. I told her it’s because of the splendid rich folks who keep all that land for growing heather and raising lots of grouse in it so that they can go out with their friends and shoot them all (the grouse that is) for fun. And Lorna said, “yeah but that doesn’t happen any more Dad”.

Unbelievable isn’t it. It shouldn’t, but it really does. Around 4% of England is owned by just a few people and is intensively managed just for shooting parties. We resolved there and then to write to Theresa May about it and ask parliament to make it illegal so that all that moorland can become forests again. Bring on the revolution!

So anyway, house stuff: It’s all moving pretty slowly because we are busy with work and all that. But a few cool things have happened recently…

Windows. We had to have a lot replaced. Langley Furniture Works built us some new ones which the heritage officers approved of and apart from nearly bankrupting us they did a wonderful job. The windows that were salvageable I repaired and painted to match the new ones as best I could and I’m pretty pleased with the result. You can get pretty far with wood hardener, 2-part filler and a shaky old ladder. 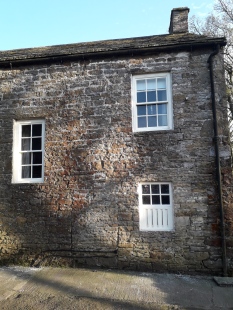 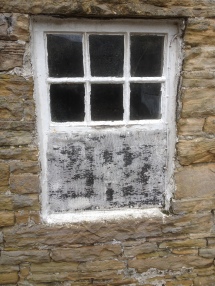 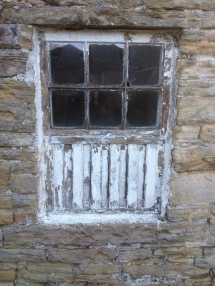 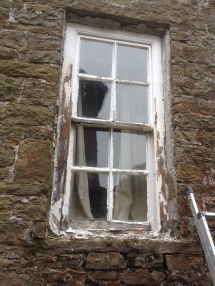 I’ve also been cleaning up the old fireplace lintels using a nail-gun. Its a very slow, juddering, deafening and filthy process but well worth it, bringing up the colour and grain of the stone beautifully. Check it out. 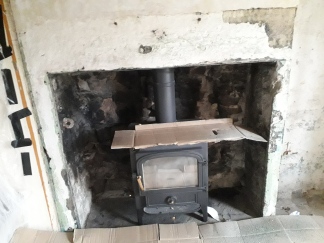 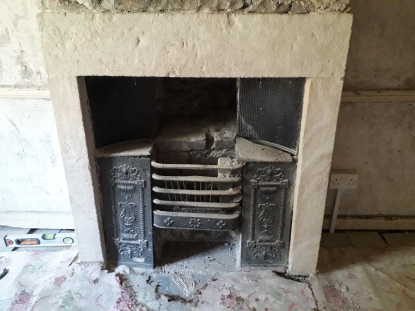 How the kitchen fireplace looked at first!

Cleaned up lintels in the kitchen

Lastly we have had a lot of noteable weather and neglecting to mention it just wouldn’t be British damn it. So here are some pictures of our little world in the snow and the sun.

Recent snow on the road

Finally the new apple trees I planted last year are starting to bud so we surrounded them with manure and leaf-mulch and have started chucking buckets of water on them, hoping for a bumper crop and cider all round in the summer!

We’ve had some lovely visitors recently, including the wonderful Orange family. Chris built Susie a website at the kitchen table in a few hours and also took a nice video of a walk we went on in which animals and children seemed to narrowly avoid hypothermia and I forgot I had a flask of hot tea in my bag – sorry about that guys! 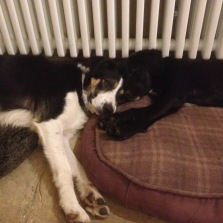 George and Alfie stop fighting for a moment 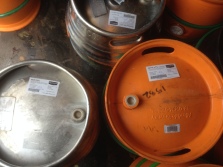 On the beer run

My dear dad who we said goodbye to this easter